Had back to back conventions so have not been able to do any blog posts. Work's been busy too! Darn it! So let's see what kind of damage I can do this morning, shall we? Heh heh

February 2-5, 2010 saw me at AggieCon. It was nice to be able to go on down there again. Run by alumn and also current students, it has been a staple at Texas A&M for many years. This was the first year it was held off campus, as most of the space that used to be available for the convention has had to be converted for other things. Been seeing many of the ConCom's peeps at other conventions in 2009 trying to see how others did things. For their first time in a totally new venue, I thought they did an awesome job! Congrats, guys!

What I did enjoy more than usual too were the room parties. Mostly put on by other conventions trying to attract pre-registration members, and groups doing World Con bids, they tend to be incredibly packed affairs. I'm not like the biggest party goer around (I tend to be more of a wallflower. I'm shy... I just am!) and when it's wall to wall people, hot, and noisy, it tends to put me off. But because of the new venue and possibly students needing to go to bed early (crazy, right?) they were much more lightly attended than normal and that was awesome! Made the parties quite relaxing! Even got to harass some peeps. Bwahahahahaha! (Oh and being on a panel with A Lee Martinez and Rosemary Clement-Moore when they're both real tired was a blast! Oh the blackmail material! YES! Bwahahahahahaha!) Ahem...

And while I have done readings at the Yard Dog Press Road Shows before, this was my first time actually taking a part in one of the small Who Done It Bubba Mysteries. I gave all my clues away as I didn't know how we'd know what round we were in, but was able to errr salvage the situation. Yeah! I said we had us a Government Conspiracy! Woot! Heh heh. Was a lot of fun.

Also had an added treat, as I was asked to introduce Martha Wells (Texas A&M Alumn) at her Q&A and reading session. Only mispronounced a thing or two. And didn't fall on my face, so it was mostly successful on my part? Eek!

Want to thank Rie Sheridan and Mel White for helping me and Kathy Sullivan with rides to and from the airport down there. The ride with 3 of us in Rie's small pickup was an adventure all on its own. Hee!

February 12-14, 2010 was spent at ConDFW! Since it's super local, I dragged my daughter along so she could ply her wares for Chibi Chains as I hocked books. Weirdly enough while people enjoyed looking at her colored chainmail jewelry, it was her Japanese chainmail blocks that were popular! Especially with teenage girls. The things are fun to play with! 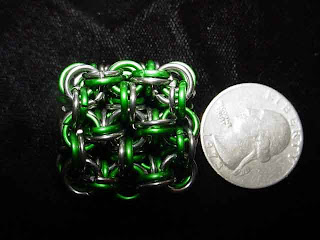 Had a great time seeing peeps and talking up a storm. Also helped judge the costume contest for the first time ever! I even tortured those who showed up for my reading with a short story I've been kicking about and then asked them for comments to help improve it! Bwahahaha! (Bet they were not expecting that! Hee hee!) Ended up being too tired to do the party runs. Ugh.

What else? Oh, I'm going into Movie Theater withdrawal. Between the cons and all the OT hubby's had to put in at work, we've not made it to the movie theater in weeks! Eek! And there's stuff I wanna see out! Oh noes! Need to sneak in one or two somehow before I come up to the next convention. lol.

Have an awesome day, ya'll!
Posted by Gloria Oliver at 9:04 AM