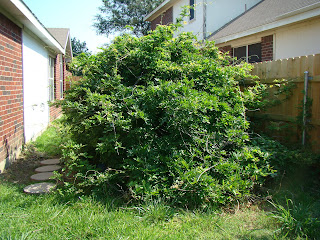 A few years ago I read a manga (Japanese comics) that involved the spirit of a dead woman. In the story, the spirit hung around/was tied to a Wisteria plant. The plant she was attached to was part of a whole public garden of them. It was the type of Wisteria that’s vine like and can be grown on a trellis. I thought they were super beautiful and decided a trellis plant would be a neat thing to put in the side of the backyard.

Mind you, our back yard is like a win funnel so the very back tends to get hard breezes so we have plants that have lived and some that have died, including trees. The side yard though, for whatever reason, has killed off everything we’ve ever tried to put over there. Still, hubby and I are nothing if not stubborn. So we went and hunted down some Wisteria and a trellis and gave it a go.

With the large amount of shade that tended to shadow that side of the house, the Wisteria was happy and grew and grew. Ended up growing so much it started destroying the trellis it was on. So since our swing had bit the dust, we brought the frame on over and gave it that to play with and even strung wire from the roof to the fence for it to work along. It went nuts.
We had to replace our fence this year though. So the sucker got cut back a bunch so the work could be done and also as it was working its way on the roof, so it would not muck that up and create leaks. I wasn’t sure how it would take to this punishment. I shouldn’t have worried. The Monster Plant LIVES!

Here are some pics of the beast! Now if I could just catch it at the right time when it’s blooming.
Posted by Gloria Oliver at 6:26 AM