Vaunda Perry - I miss you! 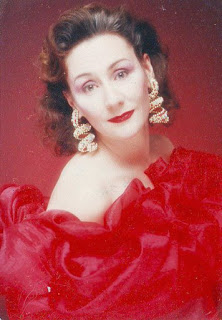 On 9/1/08 I received some terrible news. Just the final touch to an utterly nasty month. My long time friend, Vaunda Perry, had passed away on Wednesday 8/27.

I'd know she'd had some troubles back in 2007, but from all reports she'd recovered from those and life was good. Came to find out that in actuality when she had a cyst removed from her abdomen, the doctors found cancer growth in the lower bowel section. Though she went through treatments and the bad section was removed, it was not enough. Vaunda was told she'd have about a year to live, in which she planed to move to a hospice and then slowly inform those close to her as to what was going on. Fate had other intentions. The cancer spread very quickly and led to organ failure. She was gone.

Though I'd only met Vaunda face to face back in 1996 when I broke down and after much prodding by my friend Wendy, went to Japan, she and I had been friends for years before that. Vaunda, Wendy, and Dee, had moved out to Japan a number of years before and had made what came to be known as the House of Three Gaijin. The three had gone off to the Land of the Rising Sun as English tutors. Vaunda eventually found work at an Engineering Firm and even had a side business with some partners to bring more choices of dog food and care products to the people of Japan.

I met Vaunda and Wendy through the oddest of places - an Amateur Press Association aka APA. Back before the days of what the internet has become, quarterly zines or APA's were the easiest ways for fans of particular shows to get together and share stories, ideas, art, etc. The one we met up in is called Bird Scramble (still active to this day) and is for those fans of the Kagaku Ninjatai Gatchaman (Battle of the Planets in the late 70's, Eagle Riders, G-Force, and a couple of other incarnations since have been shown in the states).

I began corresponding with Vaunda in Japan (first by *gasp* letters then later email), even making care packages for her and the others of Sunday Newspaper Comics of all things, which I would send by seamail every few months. In turn, Vaunda sent me manga (Japanese Comics) and got me hooked on all manner of authors/artists. Even sent anime BGM's (Back Ground Music), which I am a total junkie for.

In '96, after caving in the year before and resigning myself to the fact I was going to Japan (I honestly tried to get people to talk me out of it (the money and all) and instead they pushed me to it!) the first person I met upon my arrival was Vaunda. She was there for many firsts for me - first ticket for trains, first train ride, first car ride on the left side of the street, first genuine Japanese home (cool two story garden home, with tatami rooms and modern rooms, and heated toilet seats!!!!), first super narrow set of stairs, first time sleeping on Japanese bedding, first time eating home cooked Japanese food, first time in a Japanese style bath, and many others!

Over the next couple of days she shared her home, her town, and what delights she had discovered in Japan with me. These included the nice little town of Sakura (not named after the flower but rather the fact it was an old Samurai warehouse/depot), roadside shrines, and a couple of preserved country samurai houses called Sakura Buke-Yashiki, as well as the National Museum of Japanese History, which had some awesome small scale models of towns, shopping districts, and other things. Narita-yama was another location she took me to - way tons of temples and shrines. Utterly fab. She made my first chunk of my trip to Japan totally unforgetable. I've been grateful to her (and Wendy and Dee!) for those experiences ever since.

Vaunda had a fun heart, had a truly unique art style, and was a good friend through and through. She'd worked for NASA back in the early days of the Space Shuttle program rigging electronics in the cockpits. She often remarked how from the moment she'd first set foot in Japan, she felt like she'd come home. She adored the food, the people, the enviroment and the history of the place. Her dogs were her happiness. Goro, and later, Sena, totally filled her life and made her very happy. (She spoiled them rotten!) I've been assured her two kids are being well taken care of.

I'm going to miss you, my friend!

Posted by Gloria Oliver at 2:32 PM