I've been a music junkie most of my life, especially focusing on Sountracks/BGM's (Background Music) for movies and Tv shows. Over time I accumulated a decent sized collection of tapes and later CD's. However, probably in the last ten years or more, I've bought less and less and I found it harder and harder to find time or the easy means listen to the music.

For several years at the job, it wasn't a viable option to have a radio or CD player. I used to be in one of those open cubes in the middle of the hallway, right by the restrooms with tons of traffic. (Can you say ew?) And between writing, marketing, conventions, and life in general, listening to the stuff at home was also difficult. (Nope, I am not one of those that can normally write while listening to music. Darn.)

Work location improved and the radio/CD player brought to the office. But then it was a matter of actually remembering to bring the CD's. Worrying about pausing, changing them out, taking home,bringing more, etc.

There was a solution. One I had been eyeballing for a year or two. Well, I finally caved! I am now the owner of an IPOD! With a wondrous 8 Gigabytes of space so I can cram as much music into the thing as I can possibly want. A cheap $30 stand with speakers lets me rock away at work without having to use the earphone. And it has been fabulous! No more commercials from the radio, a shuffle option so it keeps things fresh and surprises me with tidbits, option to play an album straight through if I get a craving. Sweet!

Of course like with all things in my life, I did have to go through a learning curve. The iTunes software is not the most intuitive and figuring out on how to get items listed on the PC software side and then figuring out whether to sync or have it only load new things or what not (some options it seems to deal with better than others...drove me nuts for a bit). And of course there's making sure to find the time to bring the CD's over to the PC and have it record the songs so you can have them in the Ipod. Something simple to do, but harder to arrange.

Have gotten some done though! So I now have 829 pieces of music to listen to. And it's not even the tip of the iceberg. It's been so nice to listen to some old favorites and some new tunes/tracks! The organ intro to Sweeny Todd is awesome! (Got it for Christmas!) It sent goosebumps all over the place. (The Star Wars theme does the same thing to me as well as a few others!)

What the Ipod is also giving me is an opportunity to try out new composers as well. Just recently I dug around for some info on Chris Lennertz, one of the two main composers for the TV show Supernatural (what? You didn't actually think this wouldn't somehow get back to my obsession, did you? Shame on you! :P). Mr. Lennertz has definitely been around the block and I was quite surprised to read that I had run across his work before - the show Brimstone for one. He's got several sample MP3's at his site to give you a feel for his great skills and versatility. He's done a lot of work on TV, Film, and videogame soundtracks. What I have been listening to is definitely working his work way up there with my other favorites, John Williams, Danny Elfman, John Barry, and Jerry Goldsmith. Go Chris!

Next on my list to check out is Jay Gruska - Supernatural composer #2! Bwahahahaha!

May your days too be filled with music and song!

Posted by Gloria Oliver at 6:18 AM No comments: 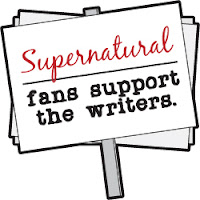 As an author, I definitely feel the need to try to support my fellow writers out in TV land now that they've had to go on strike to insure that they get paid for their work.

One organization trying to consolidate efforts to support writers both in the picket lines and in as many other ways as possible is the Fans4Writers.com group.

At their site, there are many links with information, ways to show support, how to contribute, where to link to them and information, etc.

So if you feel in the least bit stirred to help out those hard working writers out there fighting for their rights, please make sure to visit.
Posted by Gloria Oliver at 4:40 PM No comments:

The Weirdness that is my Subconscious

I tried to look up a definition of the word subconscious and sadly found the answer to be somewhat lacking. Per The Free Dictionary it means - The part of the mind below the level of conscious perception. Though I suppose the fact that the definition is so vague does somewhat imply how little we truly do know about the subject, but I still had hoped for something a little more concrete. :P

Well, anyway, mine has been a little quirky lately. After quite a spell of no dreams (didn't even realize I hadn't been dreaming till it started up again), they're back. Must say I rather missed them -- once I actually noticed that is. And back with a vengeance they are too. Not just one or two a sleep period but pretty much constant the whole night. I honestly think that cold back in October just got everything out of whack and only recently are things truly going back to normal. And I think the old subconscious is trying to make up for lost time. Not something one would think of, that's for sure.

Anyway, what got me thinking about doing this post was a weird habit my subconscious decided to pick up when it came back with dream mode. At my house, I'm the one with the alarm and then after I get up I turn on the light and go feed the cats. The light wakes up hubby. (A much better way than me calling out to him, as that method scared the crud out of him 1 out of every 10 times. heh heh. He also seems to be impervious to hearing the alarm on my side.) Well, my tricky subconscious decided that if it was anywhere less than an hour before time for the alarm to go off and I needed to go to the bathroom, it would use the alarm sound in my head (even in the middle of dreams) to let me know it was time to go. Weirdest thing ever!

I physically had to look at my clock and check the time to make sure the thing really wasn't going off. It copies the alarm exactly, even to how it feels hearing it when asleep - that whole seems like an intrusion part.

Of course since I was going to write about it today, it didn't do it this morning! The thing is playing with me! Not sure if that's a good thing or not. Or what it says about me. heh heh.

So keep your mind open... Your subconscious may be out to get you! Bwahahahaha (Yes, I am getting plenty of sleep and not on any stimulants. Thanks for asking!) Heh heh heh.

Posted by Gloria Oliver at 6:12 AM No comments:

Supernatural - Christmas Carols Winchesterized - Do You Hear What I Hear

My Supernatural list put out a challenge this weekend to mutate Christmas Carols to Supernatural. Hadn't been planning to participate, but while hubby and I were at a Sonic Drive-In inspiration smacked us between the eyes. By the time I got home and found the lyrics, I realized my original thoughts would not work and needed tweaking, but all came out okay in the end. :P

This goes with the tune of "Do You Hear What I Hear?"