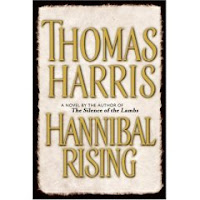 
Premise: Taking you back to World War 2, we meet Hannibal Lecter as an eight year old and walk with him through the paths of memory to a childhood destroyed by war, as so many were in that time. Losing partial memory due to the trauma of one specific event, Hannibal is eventually found by his uncle and taken in. But though the war is over, tragedy still strikes his life, and the horrid pall of those moments not remembered still haunt him, wanting resolution.

Review: Though this book is about Hannibal Lecter, the terror and horrors portrayed within are different from those covered in the others books - so if you are looking for the same as the previous ones, you might be disappointed. But keeping that in mind, it is well worth reading! Most of the atrocities are not perpetrated by Hannibal, which only makes them even more gruesome because things like this truly happened during the war. The book is imbued throughout with the wonderful flavors of Europe, and for an even greater treat, we get an oriental touch brought in through with Lady Murasaki. That Hannibal was not a normal child is evident from the first. That he walked a fine line which he crosses back and forth always aimed toward its predetermined conclusion is never in question. But it was fun watching him do it. We see his first love, his first enemies both on the side of the law and outside it. Even a rival for the woman who has his affections. Whether you agree with Harris's view on how his creation came to be, this book offers a colorful look into a chaotic, volatile time in history and the things being faced by those who lived in it. Just for that, it was definitely worth the read. All the rest was a wonderful bonus. ***3/4