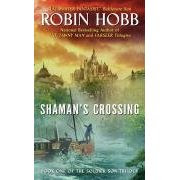 Premise: Nevare is a second son. And as such, his future has been decided since birth - he will be a soldier. But when his well meaning father gives him over to an old enemy to learn their ways, Nevare's path takes an unexpected turn that will work at destroying that expected future. As grows older and joins the academy, not only will he find that the structured world he has been led to believe exists, is not as black and white as he'd been told, but that he could be used as a weapon to destroy all he holds dear.

Review: Wonderfully detailed world, with well constructed societies, politics, etc. The prose was smooth as silk and a delight to read. I was totally fascinated by the differing cultures and social structures as well as the hazing and other difficulties at the academy. Only difficulty I had was that the main problem was often subdued and was minimally hinted as ever getting to have an impact. When it does, it does it BIG, but it took its sweet time. Yet this only bothered me subliminally, the rest keeping me quite busy and content. ***3/4!!

Posted by Gloria Oliver at 8:49 PM