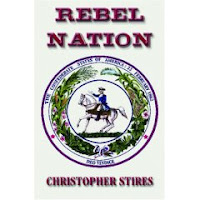 Premise: Alternate Earth where the South succeeded with their play to separate from the Union and become their own country. Now in the present, as the Confederate States deals with a turbulent time of political change and possible brighter future for their minorities, news reporter McKenna Alexander must deal with the fact her ex-husband is rumored to have been the one who put the 5 million dollar hit on a recently released rights activist. Would even Cullen sink to such depths, or does someone else have an agenda and is just using him?

Review: Totally fascinating. If you've ever even considered reading alternate history, this book is for you! Wonderful attention to detail and world building. Great suspense, awesome prose, and plenty of hair raising excitement to boot! Characters are well developed from all sides, with plenty of insights for a nice 360 degree view. Intrigue, love, murder, hate, misguided manipulations, sacrifice, this one has it all! ***3/4!!!
Posted by Gloria Oliver at 6:34 AM