Movie of the Week - Curse of the Golden Flowers


Premise: The empress of China knows she is not loved by her husband. She suspects that now that he is returning home, he will try to rid himself of her. Regardless of her high station, due to her husbands manipulations, there is little she can do to affect his plans. She means to try anyway.

Review: Yun Chow Fat is so utterly heartless and evil in this film! Eek! That little smile he keeps giving his wife gave me the creeps! lol. Incest, betrayal, plots, subplots, all run mad. The workings of the imperial household were amazing to behold. The lack of privacy, yet the veneer of pretension of it was amazing. A nice touch was how everything was so bright and beautiful but truly only served to hide the corruption and increasing rot inside. Some wonderful moments of emotions conveyed merely by a look are in abundance. Do not expect a happy ending! ***1/4!!!!!
Posted by Gloria Oliver at 9:18 PM No comments:

Movie of the Week - Children of Men


Premise: 18 plus years after the last child was born on Earth, Theo Faron finds himself getting pulled into a an activist movement that may very well spell the salvation for mankind.

Review: A very grim Britain, with despondency and loss of hope left and right. Lots and lots of information is supplied in photos, graffiti, etc just quick glimpses you either catch or miss. Lots of action, betrayal, and more. Quite violent in spots, so be warned. The coolest bit is watching Theo go from a dead human being to actually caring and feeling again. This movie is not for people who like to have answers. A lot of things are never explained and the ending is semi open to interpretation. If that doesn't bother you, it should be a fun ride. Also Michael Caine's use of an old old joke was never seen like this before. :P ***1/4!!!!
Posted by Gloria Oliver at 9:08 PM 1 comment:

Though the TV show Supernatural is now on it's second season, it has been only recently that I have come to realize it's become a guilty pleasure.

I rarely watch movies or episodes of TV shows more than once straight away, so if I do, it really means it impacted me in some way. Heck if I watch something again in the same year, then you know you have something. :P Anyway, I started watching Supernatural with Jared Padalecki and Jensen Ackles when the show began last year. Was pretty excited when I saw Jensen was in it as he had impressed me with his acting in Smallville the season before or so. I like his character here even better!

The premise is this - two brothers are reunited after 2 plus years when their father turns up missing. What you find out as they go along is that they are not a normal family. 22 years before, when Dean was 4 and Sam was 6 months, a dark figure invaded their home and though he spent some time with baby Sam, he ends up killing the mother when she shows up in the room and gets in the way. Ever since her death, the father has been training himself and his sons to hunt the evil hiding in the dark and also to try to find information on what killed his wife. So after being raised in rather unconventional means, Sam left to go to college, having a huge fight with his father, who did not want him to leave, and basically was told that if he left never to return. Well, now Dean has shown up saying their father was out on a hunt and has not returned. He wants Sam to help him find him.

Due to matters I won't give away, Sam and Dean stay together after the first episode to continue their search for their missing father.

Though the show is in the monster of the week formula, what I love about it is the high acting skills of those present, and the underlying plot they have already set for the season and those to follow. Season 2 has REALLY turned up the stakes and angst, and we are currently waiting for 1/11 for the revelation we've been waiting for a while regarding Sam.

There is a big dynamic being used by the show, revealing facts and tidbits in increments and even bringing things back to haunt the characters themselves. Case in point would be in ep 1 when Sam brings up the fact that their mother is dead and nothing will bring her back, to which Dean reacts rather explosively. Close to the end of season 1 Dean tells Sam that as someone told him once before nothing will bring their Mom or Jessica back, to which Sam reacts explosively. :P This back and forth switching is something they do when least expected and rather well at that! (They do the same with humor.)

The actors are truly amazing, especially Jensen and Jared. With but a look, you can tell what they are thinking. Totally amazing, and keeps you on your toes, because otherwise you might miss something. :P

I've gone and watched what episodes for season 2 I kept on the Tivo several times (I wallow in angst!) and now got my hands on the Season 1 DVD's and watched the whole thing over. Oh the seeds they have been planting all this time!!!! And the character interplay between the mains and some of the recurring charas are awesome. Yes, I have it very very bad.

So if you have time, go rent season 1 and pay attention. They are being quite subtle in many respects, but it all builds over time. Great characters, great situations, good creepy atmosphere, plenty of twits, and loads of fun!!!

when they returned to Lawrence, his feeling over the spiritual And one thing I discovered....(SPOILER!!!! DO NOT READ IF YOU DON"T WANT TO KNOW!) Sam's gifts... Aside from the visions, which are always somehow related to the demon or those he's touched, he exhibits powers that are always the same as or an immunity to those shown by others. On the episode where they return to Lawrence, Sam's spiritual sensing/connectivity heavily increased after contact with the psychic. On the episode when they met another family like theirs, where the mother was killed when the baby was but 6 months old, they meet a telekinetic, which Sam, later in the episode is able to use as well. Season 2, they meet the man who can command people with his voice, Sam proves totally immune. In the Croatoan ep, again Sam proves immune, this time to the demon virus. I believe Sam is the effect the demon has touched so many children for. Possibly so that Sam can either use the powers of or prove immune to the powers of something the demon can't reach. Which could be the plot lead for season 3. Heh.

Now all I need is to find out what John Winchester told Dean at the hospital about Sam, and see if other suspicions of mine are valid. Must know! Yes, like I said before, I have it bad....
Posted by Gloria Oliver at 7:11 PM No comments:

Movie of the Week - Happily Never After

Premise: The wizard in charge of making sure that all the fairy tales in the kingdom come out exactly like the books time after time, takes a vacation leaving his two assistants in charge. The two assistants make a ruckus, and end up bringing the device for maintaining balance to the attention of Cinderella's Wicked Step Mother. Tired that the goody slippers always win, she decides to take steps.

Review: It was sad, but this film was very disappointing. The comedy sidekicks were not funny. The prince, who was supposed to be pathetic, was funny! lol. And the plight of the kitchen boy trying to win the maiden's hand and everyone convinced only a prince could do so was, well, a little weird. There were some definite cute moments. The wolves were a howl and the witch bikers on tripped out brooms were fun. But overall it just didn't have spark. Looked like 3 studios had their hands in this one and maybe it was too many. Too bad. :( **3/4
Posted by Gloria Oliver at 6:39 PM No comments:

Movie of the Week - The Good Shepherd

Premise: Edward Wilson, aka "Mother", has a problem - his operation in Cuba was compromised. He has a leak in his organization. As he attempts to staunch the damage and find the leak, he flashes to the past and how he ended up being part of what eventually became the CIA.

Review: Great film! Lots of faces you will recognize. Tons of subtlety every where - you must keep your eyes peeled. A lot of things are not spelled out, though they are there to see, and for connections to be made. A couple of spots, you blink and you will miss what they are saying. Just like the spy world, it's all there in the details, you just have to be able to sift it out and see the picture they paint. Truly enjoyed this. ***3/4!!!!

Hint: Keep the guy they show on the beach in mind for the flashbacks. But most importantly, do not forget the sequence with the dollar bill and what it means toward the beginning! This will come in very very handy toward the end!!!! You'll see! Heh heh heh
Posted by Gloria Oliver at 6:17 PM No comments:

Book Review - The Element of Fire 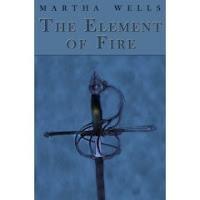 The Element of Fire
by Martha Wells

Premise: Thomas Boniface is the Captain of the Queen's Guard and has for years found himself in a very precarious position. Not only was he at one time the queen's lover, but her son, the heir apparent, does not like him, the heir's confidant wants him dead, and many others would just like him away from the queen's ear. His constant juggling act to maintain order and keep himself alive is suddenly made much more difficult when not only does a rogue wizard enter the scene, but the bastard daughter of the old king shows up as well. And with the sudden uprising of the Fae to deal with as well, Thomas has more than his hands full.

Review: Martha Wells has figured out how to bring back this out of print book so that readers may enjoy it again. I couldn't be happier, since I encountered her writing for the first time only recently and have avidly devoured all I could get my hands on. This particular book is also set in her world of Il-Rien based similarly on the time of the Musketeers. With political intrigue, murder, and Fae running amok, it is a total treat! Go Martha! ***1/2!!
Posted by Gloria Oliver at 6:40 AM No comments: