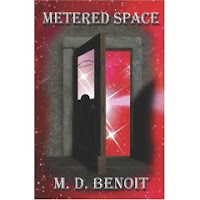 Premise: Jack Meter has been on a spiral of self destruction for the last two years, ever since the death of his beloved Annie. He's come back to town and the first thing he finds out is that the same type of explosives that were used to destroy Annie's lab have recently been stolen again. Jack tries to tell himself this has nothing to do with him, until other otherworldly 3rd parties decide he needs to start working as a PI again. Things get even worse for him when he is forced to team up with the one person in the universe who hates him most .

Review: Watching a down and out PI, who's given up on life suddenly have to take on being healed by aliens and travel to other worlds in search of a thief, while trying to dig out the truth being hidden from him by his clients is a great mix of the PI Noir and Science Fiction. The plot moves quickly, and plenty of surprises and complications crop up to keep Jack and the readers hopping. Great prose and descriptions, plus a hard edged, softy of a PI you can't help but like. ***1/4!
Posted by Gloria Oliver at 4:36 PM