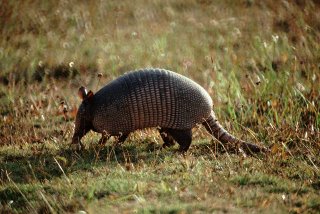 The armadillo is an indigenous creature of Texas.

And while I have often seen them far off and, unfortunately, also as road pizza, I had a close encounter not too long ago.

I was coming out of the alley on my way to work when I spotted the little critter. He was busy in the early morning dark, looking for bugs to eat in a neighbors front yard! So though I had seen armadillos before, never had I spotted one so close to my house before. I stopped the car, knowing my hubby would be behind me in moments and started pointing like a mad woman. I called him later to see if he'd seen it. He never had a clue. *sigh*

But the little bugger so utterly cute! He was flipping his little ears and just looking adorable! It absolutely made my day! (Yeah, I am easy...) :P